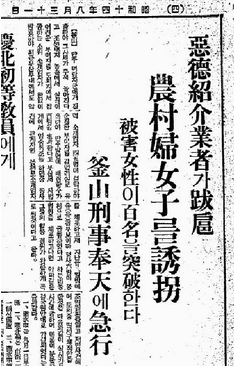 The Dong-a Ilbo reports on rampant abduction of more than 100 Chinese girls by Korean swindlers (those agents engaged in recruiting personnel) from villages in Mukden, Manchukuo on August 31, 1939. Police investigators have been immediately dispatched to Mukden from Busan, Korea.


Notes:
1.The Dong-A Ilbo (literally East Asia Daily) is the leading newspaper in Korea, established in 1920, 10 years after Japan-Korean annexation.
2. The Great Empire of Manchuria was established in 1932 and continued to exist until 1945.

Regarding some girls cheated into "comfort women" by some swindlers, Mr. Hiroo Onoda states; I often heard that on the Korean peninsula there were swindlers triking girls into prostitution. I really feel sorry for those girls who were scammed by those swindlers. Some frauds cheated girls into working as prostitutes by telling them that they would become"war nurses" while some girls cheated soldiers and non-commissioned officers into paying "surcharge" by telling them "I am a graduate of girls high school." There were quite few soldiers who trusted what those girls told them. 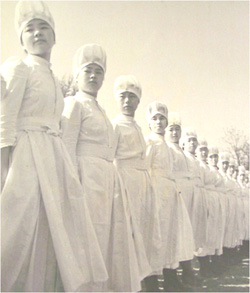 On December, 1944, Mr. Hiroo Onoda was given an order from Lieutenant general Mr. Shizuo Yokoyama, which says "You are not allowed to commit a suicidal attack. Keep on fighting for three years or four years until I come back here. Keep on fighting as long as you have a soldier left to fight for you. Eat coconuts and keep on fighting with your soldiers. I repeat you are not allowed to commit a suicidal attack."
As ordered, Second Lieutenant Mr. Hiroo Onoda had kept on fighting with his soldiers until he was given an order by Major Mr. Yoshimi Taniguchi on behalf of General Mr. Tomoyuki Yamashita on March 9, 1974 to cease fighting and to contact either U.S. forces or Philippines forces and to follow their instructions.